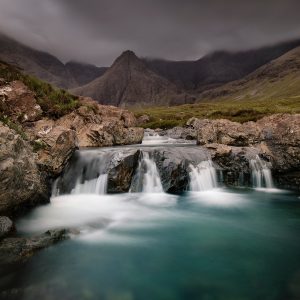 Scotland was recently voted the most beautiful country on earth and, for those who have visited, it is easy to see why. Despite the weather, it can be a stunning destination with natural beauty, the warmth and humour of the people and the fantastic food and drink scene all making it a remarkable place to go.

But how do you get away from the crowds? Where are the four best secret destinations in Scotland?

Without question, one of Scotland’s most beautiful spots and (fortunately for you) one that is very much off the beaten path. Skye is the biggest island in Scotland’s Inner Hebrides, and the Fairy Pools are a stunning reward at the end of a walk that all the family can do.

Instructions for the walk are easy enough to find, but only the most adventurous will have a ‘wee swim’ when you do get there.

One of Scotland’s most beautiful and picturesque glens, Glen Affric is a special place for walkers and hikers alike. The Loch Affric Circuit is a stunning walk but will take a good part of the day to complete as it is around 11 miles long. So, take some food and plenty of fluids and drink in the extraordinary natural beauty on show all around you. And don’t forget to take some bug spray if you are going in the summer months and the midges are plentiful!

Standing guard as you arrive by ferry into the spectacular Isle of Mull is Duart Castle. Proudly standing watch on the coastline of this alluring island, Duart dates back to the 13th century when it was the seat of the MacLean clan. It has appeared in Hollywood blockbusters too, having doubled as Sean Connery’s home during ‘Entrapment’ and it’s a delightful place to visit.

Fingal’s Cave is an incredible natural wonder on the uninhabited Isle of Staffa and has been celebrated in print by none other than Sir Walter Scott. The 227-foot sea cave is famous for its sheer scale and its incredible natural acoustics. It is now owned and protected by Scotland’s National Trust. When Scott wrote about Fingal’s cave he described it as having a roof as high as a cathedral and having been paved on the floor by ruddy marble. Scott said it exceeded his own preconceptions and baffled all description. And if that isn’t enough to persuade you to visit, then we don’t know what is. The cave can be seen by boat, with daily trips departing from the mainland ports of Oban and Kilchoan, as well as separate trips leaving from the beautiful island of Iona. If you are planning on going to visit, do check your travel insurance cover to make sure that such trips are included in your policy – as they should be. Fingal’s Cave truly is a hidden gem in this wonderful country, and you won’t be disappointed if you take the time to go and visit.

I’ve been a big fan of the West coast of Scotland since going up there as a kid and staying in a place with a boat on Loch Shiel. There was nothing much to do Read more…