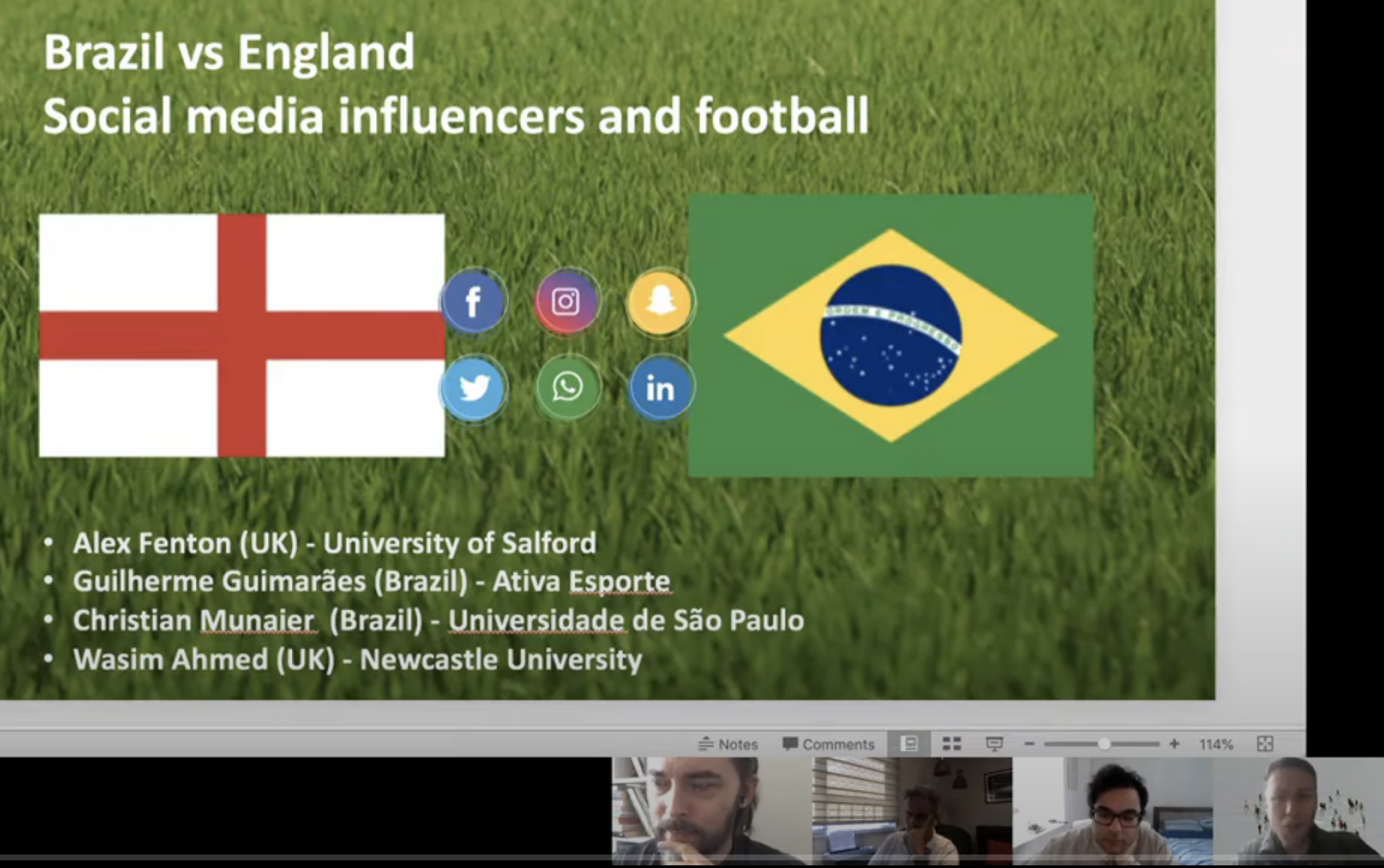 In our earlier white paper, Esports and Fan Engagement: Brazil vs England, we highlighted the  growth of esports and compared and contrasted this growing phenomenon in these countries. In this followup article, we turn our attention to the increasingly important topic of social media influencers in sport. Football players are some of the most followed accounts on social media, in some cases players have tens of millions of followers from around the world. These vast social media followings also have financial value to the player and to the brands and sports clubs that they represent. A classic example in recent times is Cristiano Ronaldo’s high profile move from Real Madrid to Juventus in 2018. Juventus paid 100 million Euros for a player who, although still a top performer on the pitch, was towards the end of his playing career at age 33. With over 300 million social media followers, the commercial partnership and sponsorship opportunities for both player and club and the international reach of Ronaldo as a brand, creates incredible potential and the same can be said for many lower profile players and clubs on a smaller scale. The short video below is a discussion on this topic and the full article can be read below.

In this article, we apply the concept of social capital to try to understand more about why these players sustain their popularity. We adopt Putnam’s definition of social capital as, “connections among individuals – social networks and the norms of reciprocity and trustworthiness that arise from them” (Putnam, 2000). Within these social networks and interactions, we use reciprocity (exchanging things for mutual benefit) and trustworthiness (the ability to be honest and truthful) in relation to our social media influencers selected for this article. These values are also important to sports clubs and other brands which work with these players and to the fans that follow them.

Our analysis initially focuses on five social media influencers from football from Brazil and England based on their popularity and engagement on social media. The game of football or soccer as we know it today was invented and popularised in England in the middle of the 19th century and today, the English Premier League is one of the most lucrative football leagues in the world. Brazil has won the most World Cups in football and has produced some of the most talented and famous players in history. Both countries have strong and popular national sides and lucrative leagues and players who use social media to reach their audiences and build personal brands. Both countries also have social issues including poverty, which also overlap and are sometimes affected by these influential players as we will see from our analysis of these players.

The players selected for this article are also some of the most followed players in the world, although there are some examples below of players globally with more followers, they are not from Brazil or England and are therefore not included in this article. We analyse both the players social media numerical data in terms of number of followers and engagement metrics using social media  analysis tools and also consider player brand profiles from a qualitative perspective. We conclude with some recommendations for working with and selecting social media influencers for brand campaigns and some best practise ideas for aspiring social media influencers and highlight the role of social capital.

In this article, our focus is football players who are also social media mega influencers from Brazil and England – those with large followings who have become famous through showcasing their skills on and off the pitch. They are social media stars and personalities but they make their living through their sport and other means such as brand endorsements and sponsorships. Social media is therefore a powerful tool to allow them to build their personal brand and interact with fans and become better known. In this article, we use digital tools and data from the KPMG football benchmarking tool and Talkwalker to delve further into these mega influencers to identify and understand more about them. This also acknowledges that influencers are much more complex than simply the number of followers, but we also take into account other factors such as engagement and sentiment by using other social media tools such as Talkwalker.

The relevance of the topic is key when we acknowledge that even in consumer behaviour, the reference group is important to understand how and why people process their decisions. From primary (e.g.: family) and secondary (e.g.: school or work colleagues) to aspirational groups (e.g.: digital influencers, sports or film heroes), peers’ influence is presented by scholars and marketing operators as a central element in consumption (Assael 1992; Bearden and Etzel, 1982; Thoits 2011).

For purposes of this white paper, we selected five players, three male, two female from Brazil, and England. This is detailed in the table below: 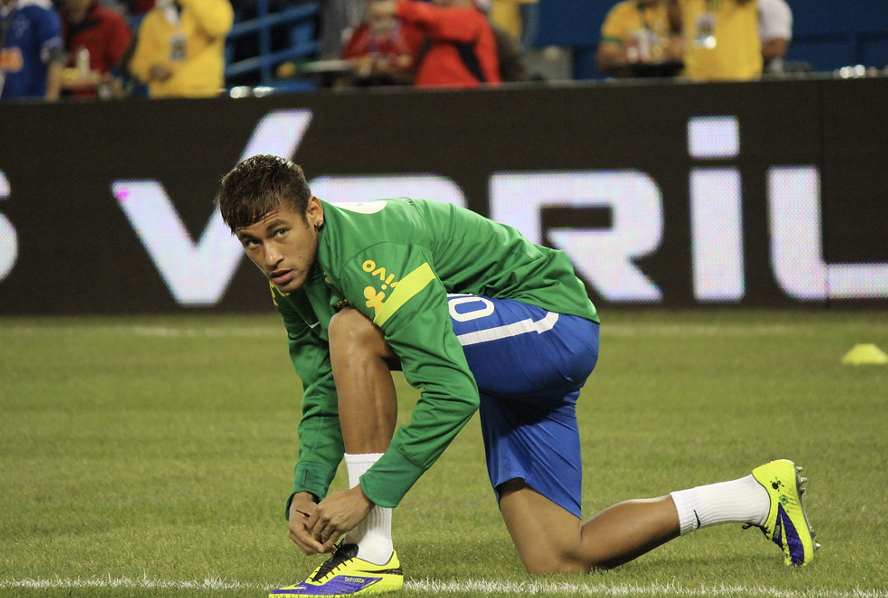 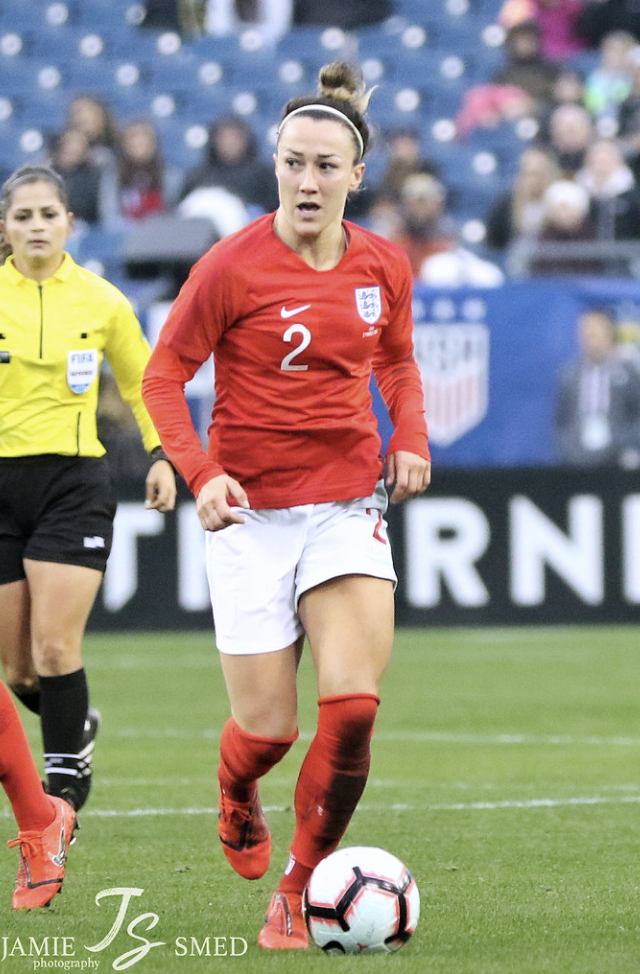 “Lucy Bronze” by Jamie Smed is licensed under CC BY 2.0 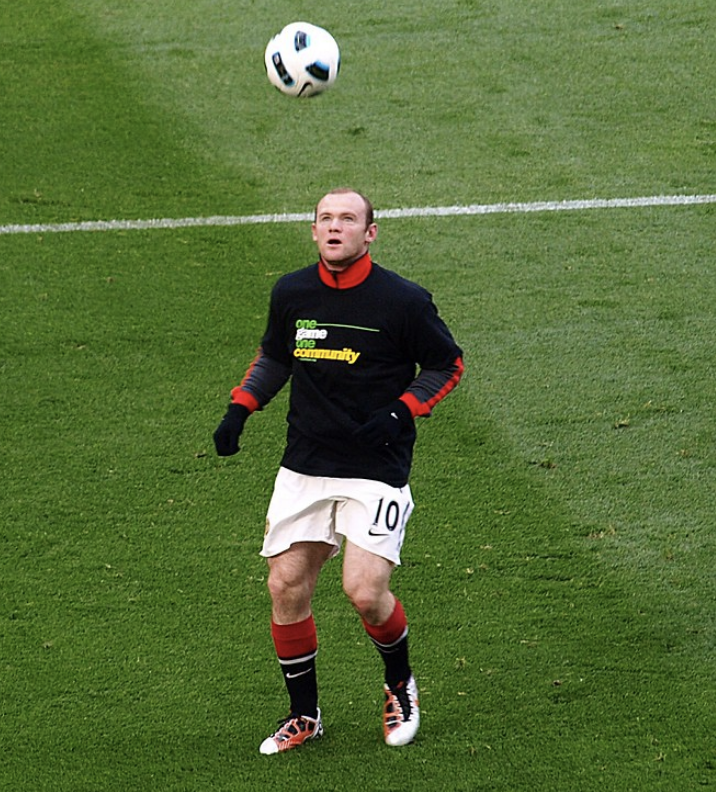 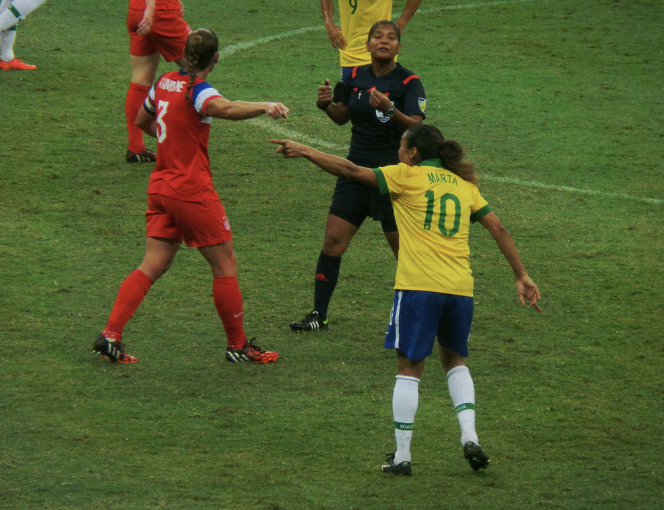 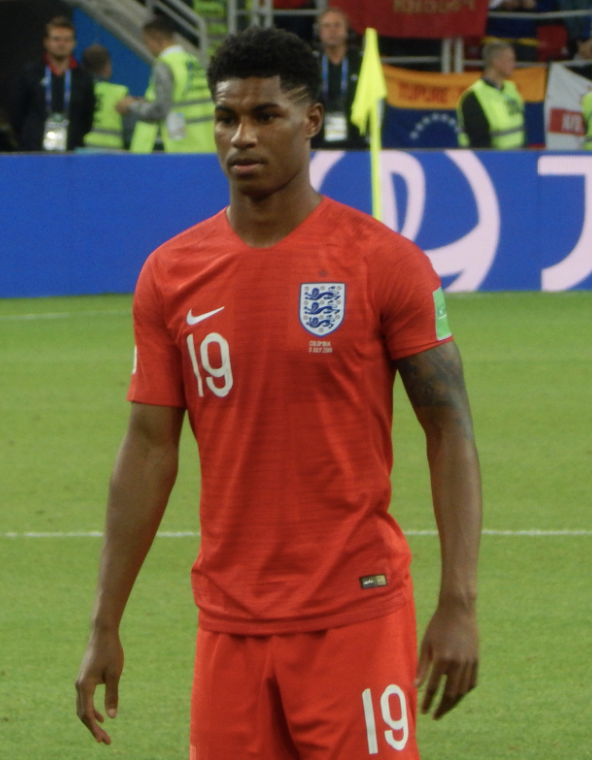 Firstly, for context and to identify the most followed football players, we worked with KPMG Football Benchmark and their updated player index. This compared the number of followers on Facebook, Instagram, Twitter and YouTube on 29th September 2020. 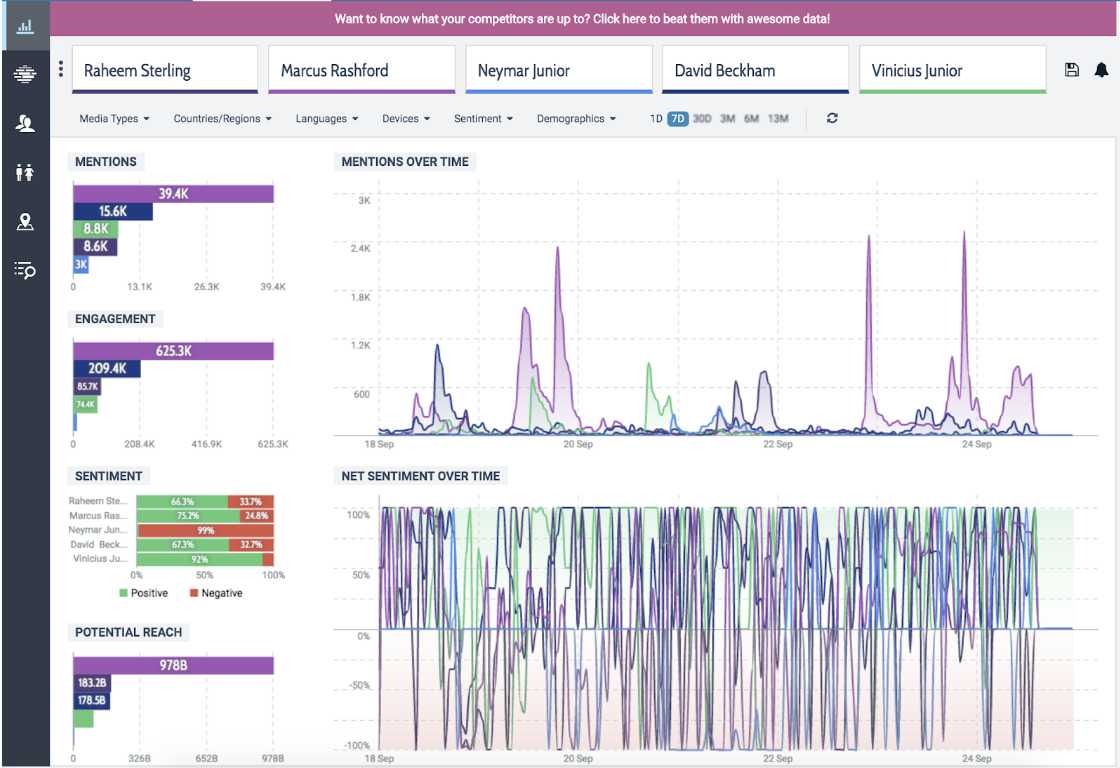 Our initial analysis of popular players within this 7 day period in September 2020 revealed that Marcus Rashford had the most mentions, engagement and potential reach. He also had a high positive sentiment at 75.2% positive. 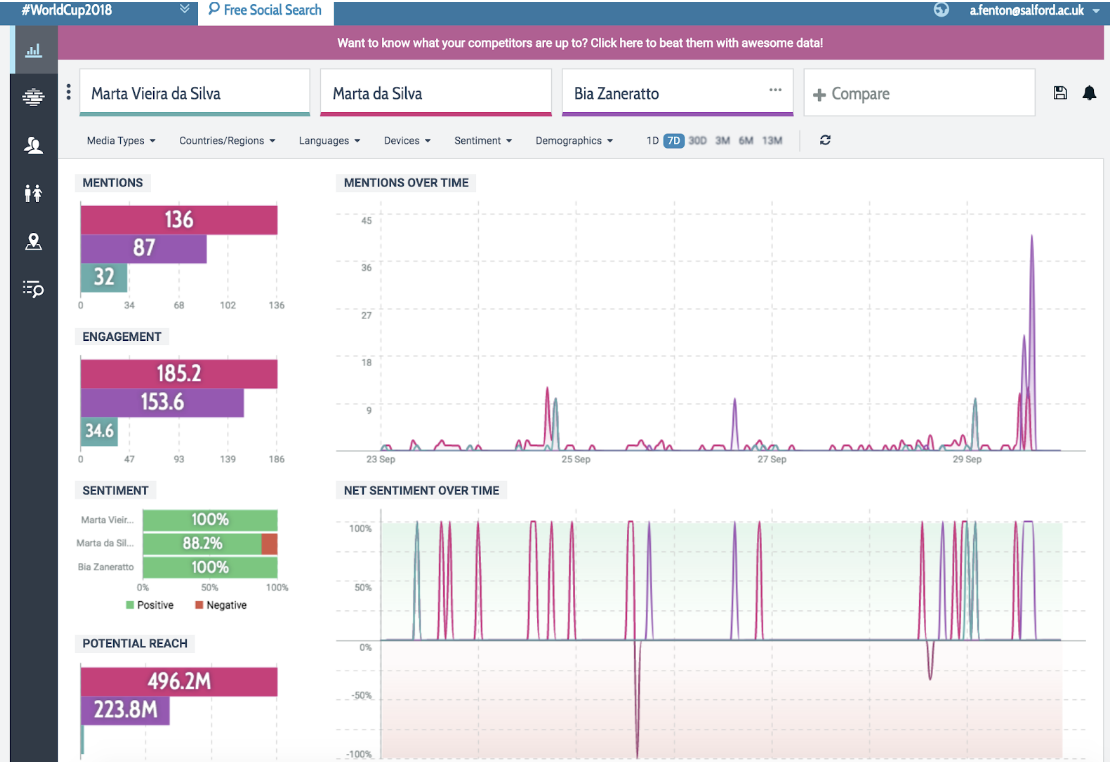 It is worth noting that players can be mentioned using their first name, surnames or both, which can make straight comparisons across channels complex. In the example above, we used some variations of Marta’s full name, compared to another popular Brazilian female player Bia Zanaretto. Although both players have a significant positive sentiment, Marta has a much larger reach due to her incredibly popular Instagram account.

Looking at Neymar’s social media account (Twitter and Instagram), it’s possible to note five dimensions: self-promotion, team player, family, religion, and ads (unmarked). In our initial analysis, there was a distinct lack of social media interactions with his fans or posts supporting fans or social issues and therefore, there is little reciprocity between Neymar and his followers. His posts focus mostly about himself and his personal life/beliefs.

Marta on the other hand has different dimensions on her social media channels (Instagram and YouTube): we note a window for intimacy, self-promotion, social causes, ads, and a transmedia strategy, leading her followers from Instagram to her YouTube channel. Marta also stands by causes close to her: gender, race and charity. Some of her partners’ promotions are about how they help her with those issues.

Looking at Marcus Rashford’s Twitter account it can be seen that a key use of Twitter is for social causes which has recently led to Rashford being awarded an MBE. The majority of Rashford’s recent tweets centre around his campaign to end child poverty and his account often utilises the hashtag #EndChildFoodPoverty. Rashford actively retweets and shares content mentioning his campaign across various print and media sources.

Remember when I said I was going to need your help…

For the millions who do not have the platform to be heard.

Let’s stand as a ‘United’ Kingdom to #endchildfoodpoverty

Wayne Rooney’s Twitter account contains more varied themes than that of Marcus Rashford. These range from tweets supporting social issues, being a team player, and tweets related to family and personal events. He Retweets charitable and other causes such as breast cancer and Against Hate Crime. How posts also focus on his current and past roles in the England squad, Derby County and Manchester United.

Lucy Bronze’s social content varied from social issues and self-promotion. Recent social issues included supporting the clap for carers initiative and partnering with Nike in order to encourage people to stay in-doors during the initial lockdown period in March 2020. She also posts about social issues including partnering with the NSPCC Children’s charity to keep children safe in sport, further demonstrating trust and reciprocity. A non sport related post on #WorldSmileDay received a large reaction from fans.

[Cameo from my lil pup 🐶😍] pic.twitter.com/njLY9RCmxD

With our qualitative analysis, we tried to show how football players, as social media mega influencers, have different ways of positioning themselves on those platforms. From our initial analysis, we found some evidence of reciprocity with all of the five influencers, but this is different in each case. For example, in the case of Neymar, we can see much reciprocity with the brands and partners that he represents, but less interaction and reciprocity with his follower fans or social issues. This could explain to some extent some of the negative sentiment present through our Talkwalker analysis.

It is possible that footballers can build an incredible following purely through their achievements and abilities on the pitch as noted in the characteristics of mega influencers as celebrities (Heinze, 2020). Social capital and positive interaction may be more important to build positive sentiment but fans are attracted also by celebrity, achievement and luxurious lifestyle. On the other hand, other players such as Marta and Marcus Rashford demonstrated more affinity and reciprocity with their audience and social issues. This in turn could generate trust with their audiences and positive sentiment.

Our recommendations from this initial analysis therefore is for brands to think carefully about their sentiment, brand values, trust and reciprocity when it comes to selecting influencers to work with. If influencers are engaging with and supporting social issues and building trust with their audiences, this is a positive sign with regards to positive sentiment. Whilst social capital can be responsible for building a supportive trusting fanbase, it is not the only element in building an audience. Personal success and talent on the pitch, celebrity and demonstration of a luxurious lifestyle can also attract social media followers.

We acknowledge that this initial analysis has a number of limitations, but it also creates a foundation for a range of new studies.  Anagnostopoulos et al (2018) call for “In depth analysis of key team figures (current and former star players and coaches) has on fan engagement”. An important way forward is to analyse the quantitative impact these different approaches have on fans and followers and how it impacts social capital. Longitudinal, mixed methods, social network analysis and netnography studies also have the potential to create both academic and practitioner insights into the expansive world of social media influence. Furthermore, social capital can be used as a lens on this data in order to gain greater insights at a micro and macro level.