Did Blackburn Rovers fans send a digital flare to India via Man Utd?

The recent fan boycott of the FA cup game between Blackburn Rovers and Blackpool was labelled by the Independent as the most important fan protest in years. Blackburn owners, Indian poultry firm VH Group (Venky’s) purchased the club when it was a well-run Premier League club in 2010.  Initially, Venky’s were looking to purchase a club in Pune, but the full ownership of a Premier League club was seen as a shrewd move, tapping into a growing love of English Premier League (EPL) football in India. The marketing video below was produced showing Rovers players tucking in to Venky’s chicken products with the action point ‘good for you’. Rovers are no strangers to cheesy and sometimes viral video campaigns. Their YouTube and social media campaign #BirdysDate hit the national press for all of the wrong reasons, but ended up with record shirt sales.

Soon after Venky’s took over, manager Sam Allardyce was sacked whilst Rovers sat in a respectable 13th in the EPL. Star defenders Phil Jones and Chris Samba were sold to Manchester United and Russian club Anzhi Makhachkala respectively. Inexperienced manager from the backroom staff, Steve Kean was appointed as manager and the club were relegated in 2011. They have since struggled in the Championship with an embarrassing merry go round of managers, players and backroom staff.

The national press, social media and search engine results for Rovers and Venky’s are dominated with negative press and comments. As Rovers bowed out of the EPL, the Times of India predicted that the future was Black and Burnt for Rovers. They were not wrong and since slipping out of the EPL, Rovers also slipped out of the consciousness of the sub-continent. The prediction of the rise of football and the EPL in India was correct. Kantar’s study of Manchester United fans for example, was the largest ever football survey and it showed that United had 659 million followers worldwide, with half of these coming from Asia. This massive fanbase of Indian Manchester United and EPL followers was the audience that Venky’s sought to tap into, but without Premier League status and stars, the Rovers and Venky’s brand became practically invisible in India.

Social capital, the trust between Rovers fans and Venky’s is at an all time low and this is causing protests in and out of the stadium. The recent FA Cup match between former EPL teams Blackburn and Blackpool saw a mass boycott of the game. What should have seen at least 18,000 fans in this local derby, saw just 9,000 fans inside the stadium and many more outside the ground in a statement of solidarity and owner protest of both sets of fans. Organisations such as the Rovers Trust, have strived to take back control of the club and get a dialogue with the Venky’s, who have essentially detached themselves from the club and halted any investment to put Rovers into a state of managed decline. Any attempts at a dialogue have failed so far with the media and digital ripples of protest largely failing to reach India. Rovers are now reported to be £100 million in debt.

Indian football fans are inspired and develop social capital between EPL stars and clubs and Rovers selling of their stars and subsequent relegation has compounded this issue. Online, the social media algorithms work in such a way that conversation around a brand leads to more visibility on timelines. In effect, that means that Manchester United fans in India will discuss United and then their timelines offer them more United content. Any Blackburn Rovers stories or content are rendered invisible by the social media platforms used extensively by Indian fans. Key influencers such as EPL stars Pogba and Ibrahimović develop strong social capital bonds with international fans on social media, eclipsing other activities.

Rovers and Blackpool’s FA cup game was dubbed as the most important protest for years, but to what extent did this message of protest reach India and the Venky’s? Rovers won the game 2-0 and this is where it gets interesting. Rovers drew in the FA Cup, none other than Manchester United at home on 19 February. On the field, a weakened Rovers side were underdogs, but off the field, this presented an opportunity for Rovers fans to make a noise that could reach India. The more Premier League favourites that played in that match, the better. The aforementioned Pogba and Ibrahimović came on in the second half. Combined, they have over 7 million followers on Twitter alone. United have over 10 million Twitter followers and 72 million likes on their official Facebook page, not to mention the millions of unofficial groups, pages and accounts for players and clubs and the dedicated international channels. 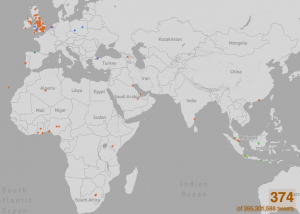 When Rovers played United, fans had a chance to unite and amplify their message of protest online beyond the shores of the UK. The big question was, would that message reach India and the home of the Venky’s and then, would that make any difference? Could fans inside and outside of the stadium and abroad, Tweeting and sharing online make a difference? It seems increasingly unlikely that social capital between the owners and fans can ever be restored, but could these digital ripples and noise in India help the Venky’s to finally decide to cut their losses and sell the club so that everyone can move on? That is the dream for Rovers fans. The Manchester United FA Cup game could have been the biggest chance in years to make a statement that should reach millions of international fans sitting on the end of smart phones and social media.

Advertise the facts of the @rovers #brfc demise in India! #Venkysout https://t.co/CJWy3BJ5GC 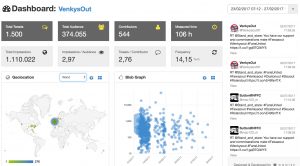 How far did #VenkysOut reach?

According to the tracker FollowtheHastag (FTH), the #VenkysOut hashtag over 106 hours had a total audience of 374,055 people on Twitter. The plight was discussed in the national media, papers, TV and TalkSport Radio. The diagram to the right from FTH shows that the majority of these Tweets were from the UK, the US, with some other areas of the world shown. It is also possible to search Twitter as follows

This reveals Tweets for the hashtag in or around India in February, but only where the location was accurately tracked, so it does not include all Tweets. An edited version of this article you are reading was republished in a different format on The Conversation. It was also republished on an Indian site called Scroll.in  This site often gets many thousands of Indian readers. It was not possible to get an accurate figure of readers on this article, but the estimate between the two is several thousand readers. In addition, a number of key influencers locally and in India retweeted the article. A good example is the Tweet below from a Manchester United fan from India, which received a good number of Retweets and Likes from Indian fans.

Did the Venky’s hear the noise?

So the message reached beyond the shores of the UK in to other countries including India, but did it reach the Venkys? At this stage, it is impossible to tell, but the message was certainly spread far and wide. Ex-rovers player and pundit Alan Shearer joined in the online noise Tweeting the below, receiving a large amount of Retweets and Likes.

It seems for now that Venky’s will keep things as they are, but Rovers supporters everywhere, will continue the noise online and offline and will unite through social media, crossing boundaries.