There’s a really interesting football connection between Latin America, Brazil and England. Copa America has been disrupted because of Covid-19 and countries in turmoil, so it was finally hosted in Brazil. GG says it’s been a roller coaster because the local competitions are also taking place at the same time. You have to pay attention to both – the Copa Brazil draw was today, so you have to watch everything at the same time.

Some fans have returned to the stadium for the Euros, but not at Copa America. Brazilians really miss attending matches, so they are watching the Euros enviously. It’s been tough for staff and players in Copa America with over 100 people infected. Atletico Mineiro (also known as, the greatest team in the world) are currently missing 11 players – 4 players for Copa America, 2 due to injury and others due to Covid. Some bars and pubs in Brazil are showing the football at half capacity, but the usual incredibly buoyant atmosphere is not there, but we will get there.

Another thing which has caused a sensation is Ben Brereton playing for Chile. He plays club football for English Championship club Blackburn Rovers, played for England at U19 and U20 and was born in Stoke on Trent. Unbeknownst to most people, his mother is Chilean, so he is now playing for Chile in the Copa America. After scoring the winning goal against Bolivia, fans have gone crazy for him, even creating a new religion about him! His Instagram followers have rocketed up 100K per day to over 760,000, which is 6 times more than the most followers of Rovers players Bradley Dack and Adam Armstrong (and the Rovers account). Armstrong is one of the most prolific goal scorers in the Championship and Dack is one of the best players in the division and is also on a reality TV programme with his partner Olivia Atwood, who is a popular reality TV star. The volume of comments, memes and likes on social media for Ben Brereton is astounding and it would seem this may increase his value and influence his contractual talks with Blackburn Rovers to an extent (although playing ability is by far the most important factor!). 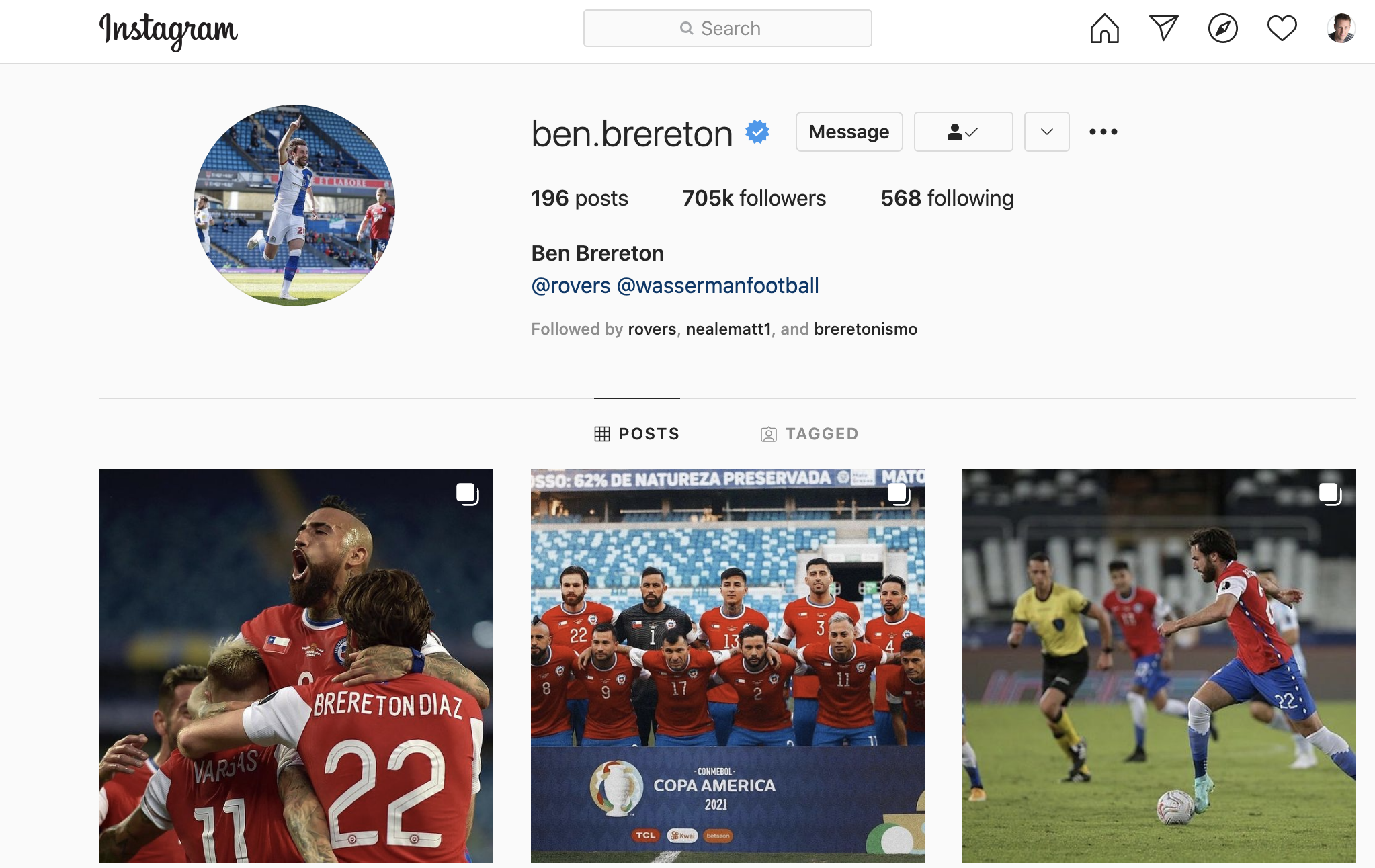 Latin people are very passionate, so the fact that an Englishman is playing for (and scoring) for Chile means that Chileans take great interest in Brereton and support their team and players with great vigour. The EPL is the most followed domestic league in the world (not the championship) but it’s the novelty of an Englishman playing for Chile and the interest in English football – this doesn’t happen very much and has created interest in his personality and anything relating to him. 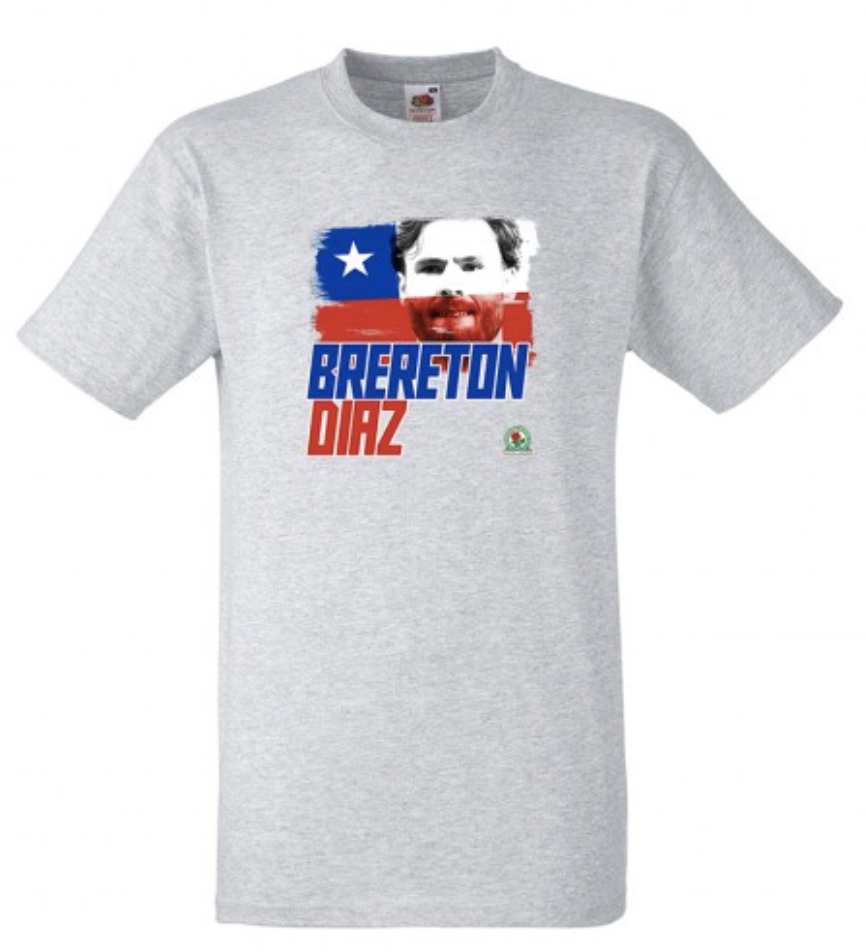 We saw De Bruyne renegotiate his contract based on his own player data, so can players do the same with an increased social media profile? We have seen the Ronaldo effect (RealMadrid to Juventus), so we may see a scaled down effect here and marketing potential. He may not be sought after because of his market potential (like Ronaldo or Beckham) but it is definitely an added benefit for hiring him – he may be paid a little better as a result. Blackburn Rovers have recently released Ben Brereton Diaz Chile t-Shirts and there may be possibilities for Rovers to tour Chile with Brereton playing to further raise interest.

We have talked a lot about social capital previously and we are seeing social capital built up with the player, which can be transferred to Chile and can link back to his club (Blackburn) in order to commercialise an unexplored market in Chile. Which could include selling merchandise and creating content in Spanish and raising social media followings, which also has commercial value to sponsors and partners. It is definitely an area for exploration. Combined sponsorship between player and clubs.

Brazilian football is revered in England. As a Brazilian in England, there is always great interest and football to be discussed. GG was at a Middlesbrough match (vs Millwall) and was approached at halftime by two large Boro fans who wanted to know (aggressively) where he was from. First he didn’t know what they wanted and was worried, but just told them he was enjoying the game – they said ‘we didn’t ask that – where are you from? He was 35 at the time and his friend came to his rescue, ‘this is our friend GG from Brazil’ – as soon as he said that, they said. ‘Brazil? We love Juninho!’ They chatted away about Juninho and GG is sure Juninho may have saved his life. So essentially the social capital built up around the player and therefore the connection between Brazil and GG therefore broke down those boundaries.

Football as an international language (and passport)

Chatting to fans in India that say ‘ I love Paul Scholes, I love his goals’ it’s the same with Pele – even though fans are from a totally different place, culture and time, fans develop an incredible loyalty and connection with the players. Alex remembers when he grew up next to Blackburn Rovers ground at Ewood, they used to play football and one of the older kids rebranded himself  Pele’ or Pelly as the kids of Blackburn pronounced it. He obviously felt he deserved the same name as the greatest footballer in the world. Nobody questioned it – It just seemed perfectly normal to call him that, nobody called him by his name after that. It stuck. He looked nothing like Pele, he was a skinny white English boy. The grand image that surrounded Pele was an interesting contrast.

GG used to work for an ad agency in Brazil and they ran a campaign around children’s cancer. Pele was a sponsor. They were in Qatar and GG’s friend for the agency was chatting to a big businessman that wasn’t in the royal family and he said that he just met the sheikh yesterday and they were like ‘wow, you were here 2 days and met him? – how? And he said – I was with Pele and it all made sense. Football transcends countries, the shirts, anthems flags and the Brazilian jersey, the yellow kit. Anywhere you go, you wear it, people recognise it.

Barcelona, Real Madrid, United are the same, everyone knows them. 30 years ago, the most iconic sporting item was the yellow shirt. And it’s still iconic today – children in England have Brazil shirts, even if they aren’t big football fans because it has so much symbolism and it stands for so much that is iconic, beautiful and  brilliant about the world that even perhaps transcends football itself.

We hope you enjoyed this article. Alex and GG will  be talking more about this topic and technology in sport live on  30 June 2PM (UK  Time). Register for free now.