CR7, Ronaldo has returned to Manchester United. To any football fan, this is big news. The continued global growth of smartphones and social media fans the flames of this news around the world. For those that don’t know – CR7 is not only the most followed sports person on social media in the world, but also outstrips all other sporting clubs and brands. He has accumulated a colossal 588,372.589 followers across Facebook, Instagram, Twitter, YouTube and Chinese platform Weibo. Footballers Messi and Neymar are second and third respectively, followed by Barcelona, Real Madrid, Manchester United and Messi’s new club Paris Saint Germain. He has more far more followers than Barcelona and United combined. With CR7’s previous move from Real Madrid to Juventus, Real lost over a million social media followers overnight. 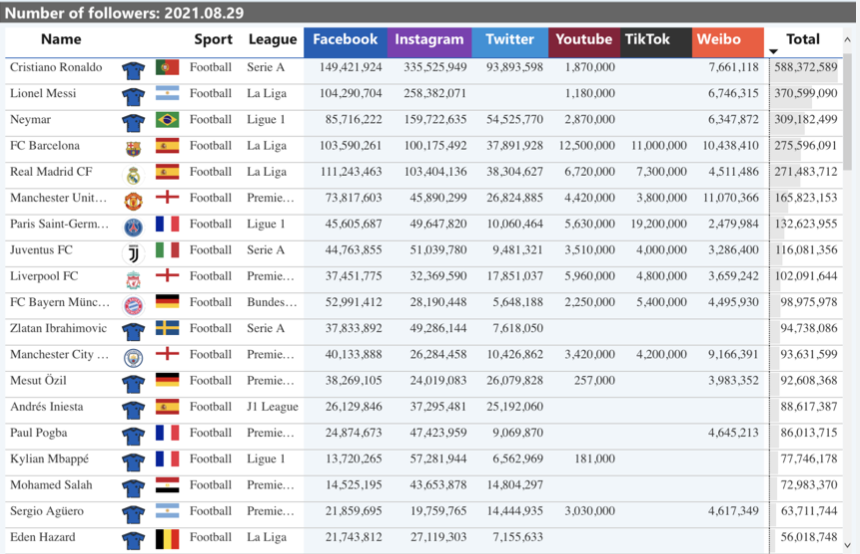 The return of Ronaldo breaks the Internet

With 335 million Instagram followers, CR7’s announcement that he was making a return gained an incredible impact. One day after CR7’s announcement on Instagram, his post became the most “liked” ever on social media. It had 19 million likes in 6 days. It is also the most liked and retweeted post on Twitter. Manchester United immediately gained a million new Instagram followers in 2 hours.

Ronaldo to United was also the most talked about transfer ever on Twitter as it beat Lionel Messi to PSG by 700k mentions in the first day. Manchester United, player and fans posted a series of social media posts announcing the return. They used words such as home, family, belonging, receiving many millions of reactions from around the world. It is this connection to players, clubs and tradition that fans love. The social capital built by Ronaldo in his successful previous stint at the club, combined with his stellar achievements with Portugal and Real Madrid make this a match made in heaven. It also coincides with Ronaldo breaking the all time international men’s player scoring record.

Messi’s recent move to PSG, whilst creating a large social media buzz, did not reach the heights of the CR7 transfer. Aside from that fact that Ronaldo is more followed on social media, the connection to his old club and old manager, the legendary Alex Ferguson. This means that the move created much more intrigue and impact on social media. It was well documented that Messi wanted to stay at Barcelona, but they simply couldn’t afford to keep him.

Likewise, Ronaldo was linked at one point, with United’s local (and title) rivals Manchester City, who were once dubbed by Alex Ferguson as United’s “noisy neighbours”. The fact that United were able to sign him instead, combined with the history, love and excitement between player, club and fans all combined creates a much greater global social media impact.

The graphic below provides a visual representation of the ‘virtual crowd’ that gathered to discuss, report and celebrate the signing. It shows how Twitter users all around the world conversed and a number of key influencers (highlighted in yellow) were particularly impactful. The shock-factor of the transfer may have particularly played a role in the vast amounts of activity that was generated. 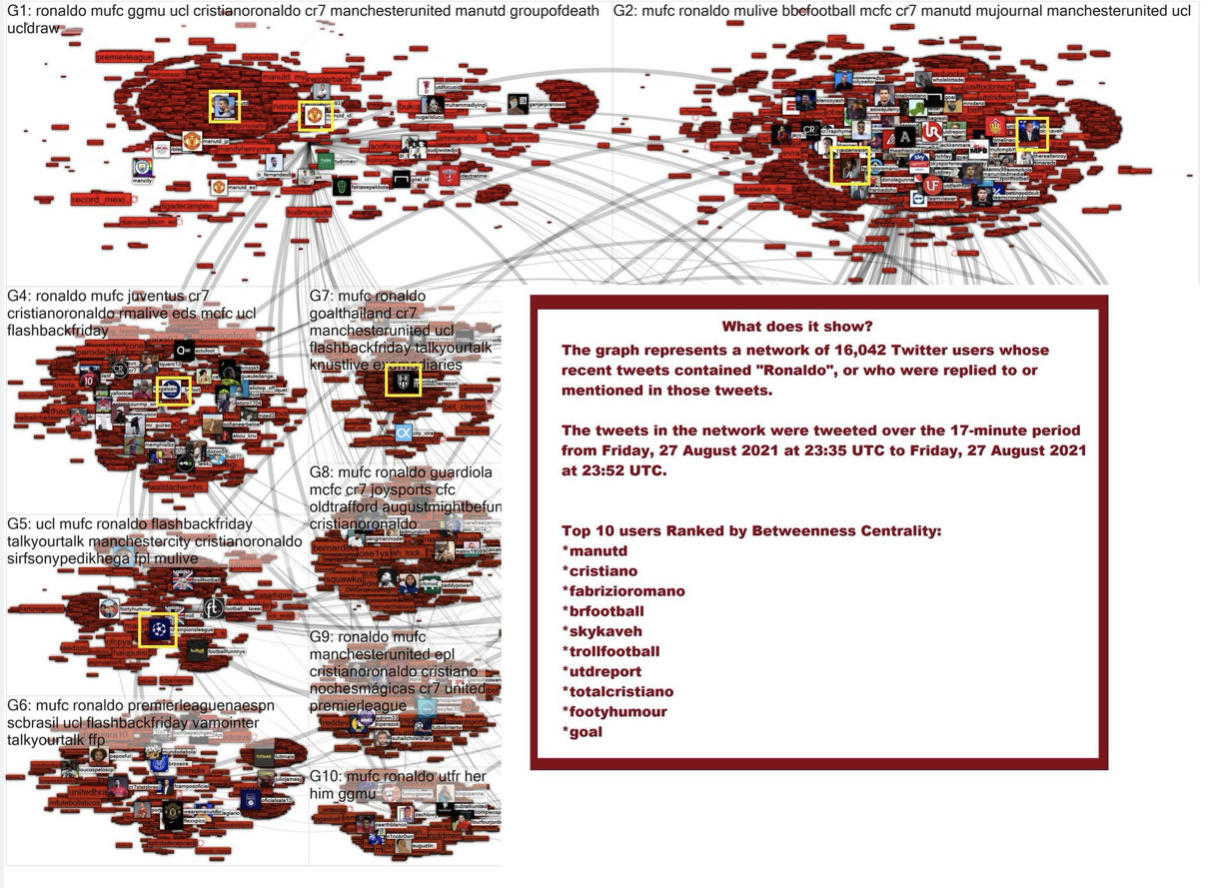 Social media allows a global following of fans who are often following the player rather than the club that they play for. Whilst there is skepticism about the value of tens of millions of social media followers, it is clear that there is huge commercial potential. Clubs and players’ social media followings are often taken into account for valuations and it is clear that the most followed and active sporting brands obtain the most valuable partnerships and sponsorships. 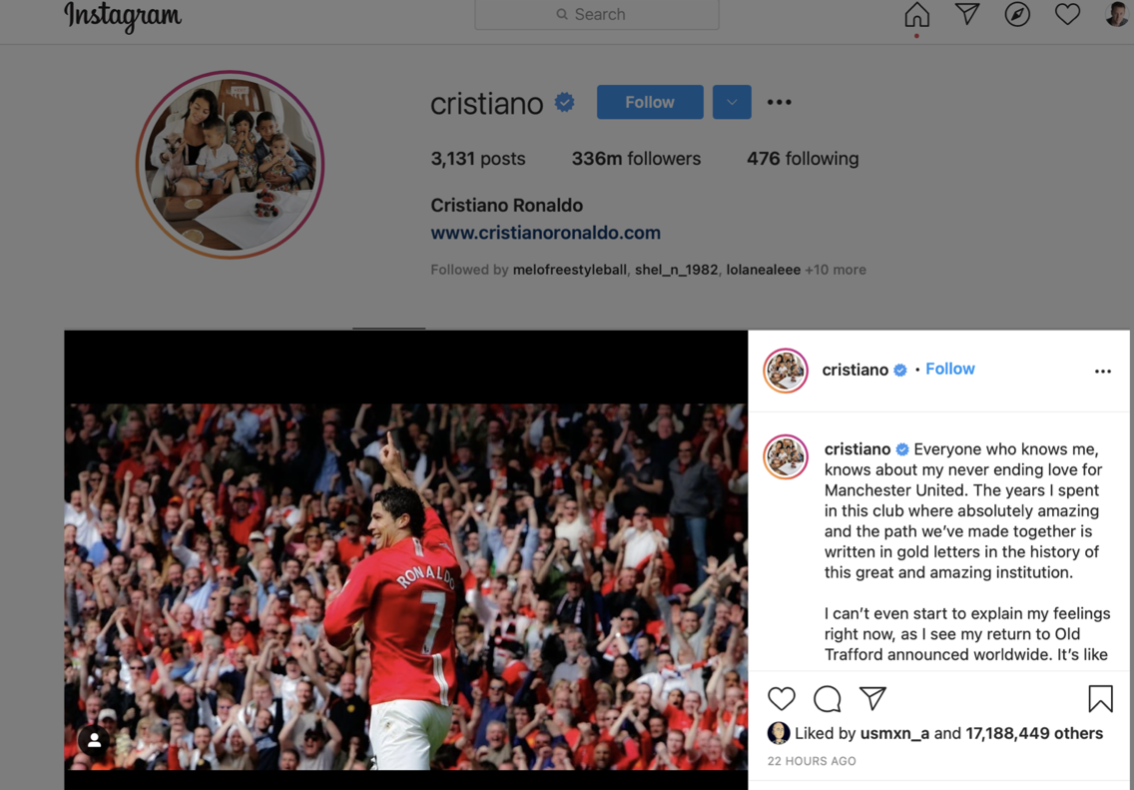 When the news broke on social media there were many people sharing the news from all around the world. Fans all around the world conversed and a number of key influencers were particularly impactful. The shock-factor of the transfer may have particularly played a role in the vast amounts of activity that was generated. One thing is certain, the importance of a world star’s social media presence will only continue to grow.

What do you think of this move by CR7 and United? Will Ronaldo be a success on the pitch or is this simply good publicity? Let us know. You can also see Alex and Wasim discussing this topic recently on BBC Sport.