The field behind the screen: Social capital and the social media communications of a football club brand

I registered for a PhD at Salford University in October 2014 and on Tuesday 06 February 2018, I had my final PhD Viva. This involves two external examiners reading the full thesis and then asking me lots of questions on it. Pleased to say that I successfully defended it. I officially became Dr. Alex on 12 April 2018. Thank you to everyone that made a small or large contribution to it. Here’s the link and reference to the full thesis:

Fenton, A 2018, The field behind the screen : social capital and the social media communications of a football club brand , PhD thesis, University of Salford. If you don’t want to read the full thing, the shorter abstract is below.

Football is the world’s most popular sport, with hundreds of millions of networked fans interacting with their favourite clubs through social media channels and content. This study aimed to discover how social media is used by fans and the role of social capital. It uses the digital marketing buyer persona spring with social capital theory in order to better understand channels, content and data. Football clubs are wrestling with questions around the use and maximisation of online communications and this study provides both practical and academic contributions in this important area. It presents a literature review, drawing upon the established disciplines of Information Systems and Marketing to contribute to the evolving discipline of Digital Marketing.

The thesis used social capital as a theoretical framework and lens on the data with authors such as Putnam and Lin being key. Salford City Football Club (SCFC) was used as a vehicle for this study. During the period of study, SCFC entered an important time of growth and online fame. Social media was playing a critical role in their evolution from an unknown non-league football club to becoming known around the world.

The study used a blended methods approach as part of a netnography. Netnography is a well established framework for conducting online ethnography. The research adopted the standards and guidelines for netnography as established by Robert Kozinets. The qualitative methods of interview, participant observation and social network analysis (SNA) were utilised for the primary data collection. Two years of extensive online participant observation were blended with insights from SNA visualisations and 32 semi-structured interviews were conducted with 25 participants. Social media managers and fans locally and globally from SCFC and beyond were interviewed. The findings from this blend are presented, compared and contrasted against a review of the relevant literature in order to address the research questions to make a contribution to theory.

The thesis showed that football clubs and their fans are using social media as a key part of their brand communications. Emotive digital content can help to engage fans worldwide. The careful management of fans and players on social media is also important to evolve the brand of clubs. It was found that football clubs should identify, segment and engage their fans wherever they are, including weakly connected social media lurkers. Clubs should consider the development and cultivation of social capital through social media interaction, content and encouraging fan led content and groups. The study found that social capital could be developed and grown online, which concurred with the findings of authors such as Lin and Bauernschuster et al. Football clubs should interact with fans and engage with weakly connected lurker fans through appropriate social media channels and content. If these groups are not engaged online, social media communications of clubs risk being drowned out because of the social media algorithms, which are designed to deliver relevant content to users. The findings were further tested by utilising primary and secondary data from other clubs to make them more generalisable. Diagrams and models were created in order to synthesise and disseminate the findings. 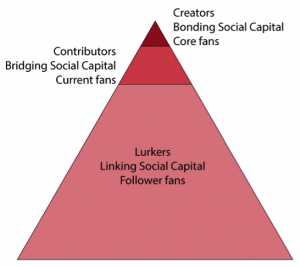 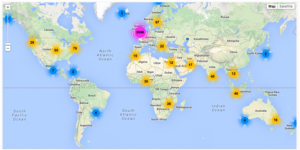 The value of lurkers

Football clubs are wrestling with questions around the use and maximisation of social media communications and this study provides both practical and managerial contributions in this important area. This research provides implications for other organisations with social media fans, and highlights the key role of lurker fans as real people who have great value to football clubs.

The findings were further tested with professional football social media managers and therefore have wider, important implications for practise. Lurkers can be engaged directly by football clubs, increasing their connection to a club and also enhancing the sponsorship and partnerships of a football club. 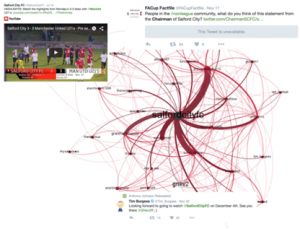 The study outlines the blend of these methods in some detail and presents the primary data gathered. The methodology enabled an in depth analysis of football clubs and fans. The same methodology can be used or adapted by academics or practitioners to understand more about sports clubs and other organisations with substantial social media followers.

If you have any thoughts on this, or would like to read more, feel free to get in touch or share this article.