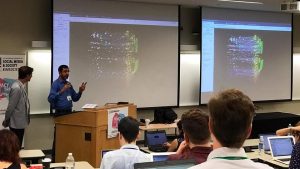 I’ve just landed back in England after an excellent weekend at the 10th Social Media and Society Conference. This year, it was held at Ted Rogers Management School at Ryerson University Toronto from Fri 19th July to Sunday 21st July. It was my first visit to Canada and this short blog post covers the two sessions that I facilitated but you can read more about the whole programme here and other blog posts such as this excellent one from Anna’s experiences at the event.

I had the pleasure of running one of the first events to open up the event. A workshop with Marc Smith, founder of NodeXL on Social Network Analysis (SNA) and Netnography (a branch of ethnography which uses online participant observation). Marc travels all around the world speaking to similar audiences about SNA and NodeXL, but this workshop was a little different. We weren’t quite sure what to expect, but we were really pleased to find that we had a large international audience ready to go by 9AM. We kicked off the workshop with a quick activity to ask attendees to add some information to a Google Spreadsheet including their names, who they knew in the room and their specialisms. The idea was that in the break we could visualise the data with NodeXL to demonstrate how SNA could work with a simple spreadsheet like this and not just social media data. It was great to see people live adding details to the spreadsheet and it rapidly filled up.

After we had introduced ourselves, Marc gave us a fascinating insight into the world of SNA. He used several analogies comparing SNA to photography. NodeXL provides both the camera and the film and from there it’s up to the operator to alter the settings and take the photographs. At the end of this section before the break, I opened up to the floor for questions and there were some excellent ones which took is into the break. During the break, Marc demonstrated how to visualise the details the attendees had provided into a network visualisation. Just as easy as making a pie chart. After this, I gave an overview of netnography founded by Robert Kozinets as a way to study social media communities qualitatively, through online participant observation. I applied netnography for 2 years for my PhD where I studied (and interacted with) fans of Salford City FC in England. I also used interviews and SNA as part of my method, so I presented some ways (and references) to how SNA could blend with netnography. The theme of this years conference was ‘rethinking privacy and trust’ and we discussed ethical sdtandards in netnography including obtaining permission from individuals featured in the study and considerations for GDPR. These topics will also be further elaborated in Robert Kozinets new book which arrives in October 2019.

I wrote a paper on the same recently also called, Studying social media communities : blending methods with netnography. Netnography allows researchers to explore and describe different parts of their SNA diagrams, uncover new insights and identify key people within the study for further exploration or interview. After this, we split the class into two groups and set an activity for each. Marc gave out some 3 month licenses for Node XL and half of the class began to try out creating a NodeXL visualisation. The other half, I set them up with a particular SNA visualisation from our study on Toronto Wolfpack and set them a number of questions for further investigation based on the brief introduction to netnography. There were some very interesting discussions and questions and some excellent feedback online and offline – it opened up some interesting debates.

You as well, and likewise! To my mind, a thoughtful netnographic approach to influence is the true way forward—very excited to see where your work and others’ go on this front

There were some further thought provoking sessions in the afternoon and we concluded the day in the Social Media Lab to see some excellent demos of social media software in development including the conference Chat Bot demonstration.

On the Saturday morning, I was chairing a session called Marketing and Insights. I signed up to chair this session because I have been working, teaching and researching in digital marketing for many years. My PhD focusses social media marketing in sport and it was pleasing to see that a number of the presenters were using ethnographic methods. I was pleasantly surprised that several were also using Instagram. I had the opportunity to conduct some qualitative analysis of Instagram for a paper for a good sport journal, so all considered the content of this session in particularly was really relevant for me. There were some great topics from ethnographical research on fitness influencers to research on powerful humanitarian imagery. There’s not enough space to talk about each session paper in this post, but you can read about them here in session 3D. As session chair, it was my job to introduce the speakers, keep an eye on the timing, encourage Q&A and summarise at the end.

In my chair’s summary, I concluded that it was important for us (as custodians of social media research) to build on and enhance previous research and theory. So therefore for ethnographical approaches which use online participant observation, selecting relevant branches such as digital ethnography, virtual ethnography or netnography. Those that have bodies of literature and standards of exit, entry and ethics associated with them. In the keynote speech prior to this session, Val Steeves had told us that teenagers had found faces on social media to be sometimes dangerous. In our session from a digital marketing perspective, it was demonstrated that faces, context and symbology can be incredibly powerful in motivating others and maximising social media outreach. In humanitarian terms, human tragedy and heroes on social media worked to amplify the message and plight of refugees.

On the Sunday morning, I headed across the city to meet the worlds first Transatlantic Sports Team, Toronto Wolfpack about a sports and fitness app project I started called Fan Fit. The conference concluded in great style with a 10th anniversary boat trip from Toronto harbour around the islands and back again. This was an excellent opportunity to have some concluding conversations with attendees and see the beautiful city of Toronto across the water. As the sun set over the water, I reflected upon an incredible weekend, some thought provoking ideas and some excellent new contacts made. I also took away some ideas for workshops for teaching next semester and some fellow academics who are interested potentially interested in working with me in the future. All considered, an epic trip and I would highly recommend anyone to attend next years Social Media and Society Conference, which will be held in Chicago next year.