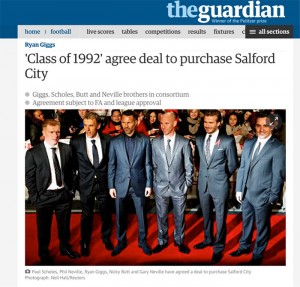 This research focuses on a new era for Salford City Football Club (SCFC). In the 2014/15 season, when SCFC were in the 8th tier of English football, they were taken over by ex-Manchester United players the Class of 92. The new era heralds an unusual case of a non-league football team having such high profile owners with reported ambitions to turn SCFC into a ‘digital football club’ (Conn, 2014). END_OF_DOCUMENT_TOKEN_TO_BE_REPLACED