When we heard about the first Vangollen festival at the Royal International Pavilion in Llangollen, we were excited. We’d been camping in that area before and had seen a very impressive hot air balloon festival on the site. So the idea of vans, bands, extreme sports and balloons sounded like an excellent idea.

We picked the kids up in the T5 straight from school and headed from Lancashire into the beautiful hills of Snowdonia. It was a simple and easy drive for us and very easy to find the campsite. After the usual shenanigans trying to figure out where to park up, we were sorted. Sun awning assembled, pop top up and front seat kids bed in place. Venturing out, Llangollen is simply stunning. It’s surrounded by rolling hills of pine trees with houses poking out where you think it would be impossible to build. This means that the festival and campsite is a really scenic affair and you really feel like you have arrived somewhere magical. 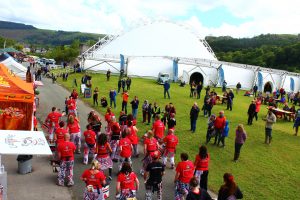 We had a walk down to collect our wristbands and check out the festival. The great thing about this site is the huge Pavilion with its impressive canopy, which covers the stage. There was an area set up for the Mountain Bikes vs Motorbikes and the hot air balloons, then lots of tables and chairs, with stalls selling food, drink and other things around the outside of the pavilion tent. After a look around and purchasing some Harry Potter style wands for the kids and watching a hot air balloon, we headed into the tent to watch The Christians play. The tent is huge and it was freezing, so we wondered if that was keeping people huddled in their vans as numbers seemed a little thin on the ground so far. Aside from the cold, the band seemed happy with the enthusiastic support gathered at the front. The Christians belted out their hits and towards the end, we got the kids back to the van and got the heating on. It was a bonus to still be able to hear the bands playing from the van. 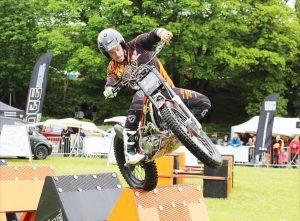 The morning started off with a few showers, so we had a bit of a lazy start and then headed down to the main site to watch some pretty cool mountain bikes and stunt motorbikes competing against each other in crazy looking challenges. After another wander around the stalls and a quick go on the mountain bike track and segway course, we headed into Llangollen, which is just a few minutes walk away. It’s a while since we’ve been into town and it really is a great place. Interesting antique shops, an amazing train station complete with steam engines and some great beer gardens overlooking the river where you can watch the white water rafters and kayakers come in. After a mandatory pint and look around the shops, we headed back to the festival site for some more music and fun. There were some cracking bands in the afternoon, people like White Noise and also Marblehead Johnson, belting out some brilliant covers and Brit Pop Classics. The sun was starting to shine and we watched the splendid Batala Samba Band marching around the site. What a view from the top of the shipping container bar, watching the samba band march by to the backdrop of t 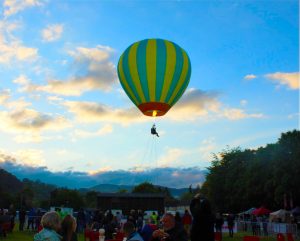 he pavilion and the pine covered hills. That must be a sight to rival any festival we’ve been to so far.

As night drew closer, the bitter cold started to creep in again, so we sheltered in the inside bar for a drink whilst waiting for the main event. Razorlight didn’t disappoint. So far, the festival had seemed fairly quiet in terms of people, but as the afternoon progressed, more and more people arrived. By the time Razorlight took to the stage, there was a big crowd and it all looked really impressive. Just before the band came on stage, one of the organisers Matt came on with his girlfriend. He popped the question, proposing to her on stage, much to the delight of the audience. What a weekend for them! The band came on and they played some of their classics, which went down really well with everyone. We stayed right until the end and then walking back were treated to two hot air balloons, which look amazing against the pitch black of the hills and night sky when they lit up. It was a very impressive Saturday night finale. 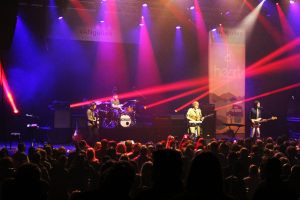 The weather held for Sunday as well, so we hung around the site for another couple of hours, having another go on the amazing Segway course. Rides on the Segway and Mountain Bike track were free and were provided for over 10’s by the local white water rafting and extreme sports company SAS Outdoors. We also had a go on the professional Scalextric track racecourse driving a beetle around the track at high speed is great fun! There were some great VW’s on display too, from the traders, some impressive vans with luxury interiors on display and some great vans camped up with us.

Like many of these festivals, it was a labour of love from a few local guys who had a dream to do something new and exciting. I can only imagine how much time and effort goes into organising a festival like this, so hats off to them. It was a great weekend. Any first year of a festival sometimes finds it hard to get the numbers and hits teething issues. If there were any of these, it 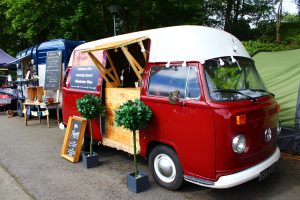 It can take a year or two before word gets around to get even more people involved. It felt though like it had a good amount of people there though, it was a relaxed atmosphere, family friendly and all the kinds of things you want out of a Van festival. We’d definitely make a return to Vangollen festival – a brilliant effort by everyone involved.