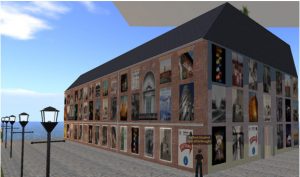 Virtual Reality and Augmented Reality have exploded into the news and public consciousness once again. It takes me back five years to my Masters studies in Creative Technology at Salford Uni. At the time, our Professors bought an Island in the virtual world of Second Life (SL).

Our profs were digital artists in their own right, using Second Life for art projects and installations all over the real and virtual world. The island let us create our own projects using SL and use this for our research. I’ve included some screenshots and a video below of some of my projects which had a web and virtual presence.

Second Life was launched originally by Linden Labs in 2003 and has maintained around about 1 million active users. Over the last thirteen years, the Second Life Universe has been through the hype curve several times and has expanded and contracted with primarily user generated content. It has been used for 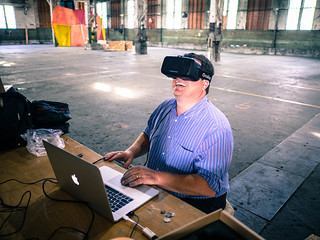 everything from Universities, cities, live performances and lectures, sports, holiday resorts, nightclubs and with a whole road and rail network linking different areas. Second Life can be used for free and also has premium membership that gives more flexibility and more ability to build and craft the virtual world.

Virtual reality is again on the rise with Oculus Rift and new applications in business, education and sport. Oculus is now owned by Facebook, which opens up a myriad of opportunities for research and development. Facebook ‘get’ social and social is the thing that can also power the next generation of killer VR applications. SL have experimented with integrating Oculus and other immersiveVirtual reality technologies. Back in July however, they removed support for Oculus, claiming that the platform did not have the horsepower to work at an acceptable level. Making a 13 year old platform ‘play nicely’ with new technologies was proving too difficult. 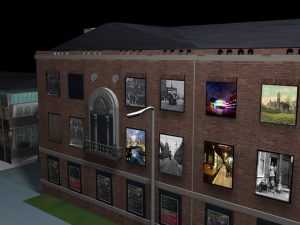 This is where Linden Labs new Project Sansar comes in. Set to launch in early 2017, Sansar is the answer to the problem of making virtual worlds work with technologies like Oculus and HTC Vive. More than this though, it will be more scalable, accepting more users in one place at the same time, which is one of the limitations of SL. The CEO of Linden Lab has also been quoted saying that Project Sansar is like WordPress for VR. Essentially, WordPress allows anyone to easily publish a website or blog and similarly, Linden wanted a tool and platform that will allow anyone to create VR experiences. Existing tools such as 3d Studio Max can also be used to build experiences.

Virtual reality and virtual worlds – is 2017 the year?

It will remain to be seen if Project Sansar will be able to deliver all of this. It seems thatVirtual reality and SL are often bigged up by the media, creating hype that sometimes cannot be lived up to with the hardware and software available. Is 2017 the year where virtual worlds will finally become social on a massive scale, live up to the hype and find their killer app?

I would love to hear what you think of this, contact me or share on social media. Alternatively, you can join us on 23/11/16 at MediaCityUK where amongst other things, we are organising panels of experts to discuss issues around VR and AR. The event is the Creative Entrepreneur at MediaCityUK, register now for free. The videos below show two of my SL projects and also a Sansar overview.