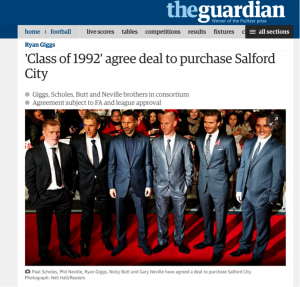 In the 2014/15 football season, SCFC play in the Evo-Stik League Division One North in the eighth tier of English football. It has been reported that the ambitions of the new owners are to raise the club up to The Championship, which is the second tier of English football, within 15 years (Bajkowski 2014). It was also widely reported in the national press that the new era for the club heralded the “world’s first digital, ‘always on’ football club, giving fans unrivalled access to behind-the-scenes activities and up-to-the-minute information about Salford City’s on-going development” (Mirror 2014). The new owners wish SCFC to succeed on the pitch and to be commercially successful in terms of attracting more fans to attend matches and to purchase club merchandise.

My PhD research study is a five year longitudinal case study. The purpose of this research is to evaluate how digital media impacts on the objectives of SCFC. This case creates the basis for a unique opportunity for research with a specific emphasis on digital media and its effects within the club. The takeover of SCFC by the Class of ‘92 and subsequent partnership agreement with the University of Salford provides an excellent opportunity to provide insight and contribution to knowledge in this field. The takeover also heralds a new, enhanced digital era at the club, providing a unique opportunity for research.

If you are interested in football, digital media and Salford City FC, I would be interested to talk to you, please contact Alex Fenton or see this page for more information on getting involved.